The VOX Spirit Radar is a tool designed using advanced math and radio scanning as a combined method to detect spirits that might be affecting the environment via Electromagnetic Interference. An advanced PING algorithm provides distance scanning from the center to the perimeter 360 times per minute covering the entire circumference radius.

The PING coupled with 120 active UHF scans allows the Radar to pinpoint Energy signatures (EMI) or disruptions, thus placing a Blip on the screen. This is a patented method by GHOST HUNTER APPS and is the only one of its kind.

The VOX Spirit Radar includes built-in voice synthesization engine (VOX) to let you hear when words have been spelled in an attempt to communicate. These words are displayed in the main screen area, but are also cataloged in the Event Log; a window that displays all words spoken by the VOX, and the coordinates of all Energy Signatures.

Bluetooth is used to scan the UHF, and when not in use the app defaults to Circuitry Disruption caused by Electromagnetic Interference via (hardware analysis). 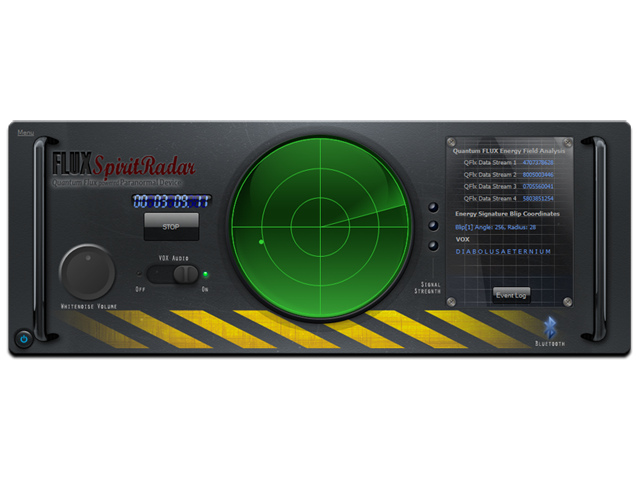 Protected by RapidSSL 256-bit data encryption and site authentication. Download link is sent to customer after purchase. Requires activation over internet during installation. California residents must pay applicable local sales tax. (State sales and use tax base: 7.5%). Applies to California residents only. Before you make your purchase please be sure to review our GENERAL & REFUND POLICY.